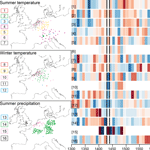 The 1430s: a cold period of extraordinary internal climate variability during the early Spörer Minimum with social and economic impacts in north-western and central Europe

Abstract. Changes in climate affected human societies throughout the last millennium. While European cold periods in the 17th and 18th century have been assessed in detail, earlier cold periods received much less attention due to sparse information available. New evidence from proxy archives, historical documentary sources and climate model simulations permit us to provide an interdisciplinary, systematic assessment of an exceptionally cold period in the 15th century. Our assessment includes the role of internal, unforced climate variability and external forcing in shaping extreme climatic conditions and the impacts on and responses of the medieval society in north-western and central Europe.

Climate reconstructions from a multitude of natural and anthropogenic archives indicate that the 1430s were the coldest decade in north-western and central Europe in the 15th century. This decade is characterised by cold winters and average to warm summers resulting in a strong seasonal cycle in temperature. Results from comprehensive climate models indicate consistently that these conditions occurred by chance due to the partly chaotic internal variability within the climate system. External forcing like volcanic eruptions tends to reduce simulated temperature seasonality and cannot explain the reconstructions. The strong seasonal cycle in temperature reduced food production and led to increasing food prices, a subsistence crisis and a famine in parts of Europe. Societies were not prepared to cope with failing markets and interrupted trade routes. In response to the crisis, authorities implemented numerous measures of supply policy and adaptation such as the installation of grain storage capacities to be prepared for future food production shortfalls.