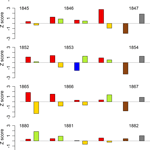 Climate of migration? How climate triggered migration from southwest Germany to North America during the 19th century

Abstract. This paper contributes to the ongoing debate on the extent to which climate and climatic change can have a negative impact on societies by triggering migration, or even contribute to conflict. It summarizes results from the transdisciplinary project Climate of migration (funded 2010–2014), whose innovative title was created by Franz Mauelshagen and Uwe Lübken. The overall goal of this project was to analyze the relation between climatic and socioeconomic parameters and major migration waves from southwest Germany to North America during the 19th century. The article assesses the extent to which climatic conditions triggered these migration waves. The century investigated was in general characterized by the Little Ice Age with three distinct cooling periods, causing major glacier advances in the alpine regions and numerous climatic extremes such as major floods, droughts and severe winter. Societal changes were tremendous, marked by the warfare during the Napoleonic era (until 1815), the abolition of serfdom (1817), the bourgeois revolution (1847/48), economic freedom (1862), the beginning of industrialization accompanied by large-scale rural–urban migration resulting in urban poverty, and finally by the foundation of the German Empire in 1871.

The presented study is based on quantitative data and a qualitative, information-based discourse analysis. It considers climatic conditions as well as socioeconomic and political issues, leading to the hypothesis of a chain of effects ranging from unfavorable climatic conditions to a decrease in crop yields to rising cereal prices and finally to emigration. These circumstances were investigated extensively for the peak emigration years identified with each migration wave. Furthermore, the long-term relations between emigration and the prevailing climatic conditions, crop yields and cereal prices were statistically evaluated with a sequence of linear models which were significant with explanatory power between 22 and 38 %.